NGINX Conf 2018: Migrating Load-Balanced Services from F5 to NGINX Plus at AppNexus

In his session at NGINX Conf 2018, Ernesto Chaves, a Senior Network Engineer at AppNexus, describes how and why the company replaced all of the F5 Networks BIG‑IP hardware load balancers in its global data centers with NGINX Plus. He details the motivations, pitfalls, and successes of the transition from proof of concept through to implementation.

In this blog we highlight some key takeaways. You can watch the complete video here:

AppNexus is a digital advertising platform. Back in 2009, they chose BIG‑IP hardware load balancers from F5 Networks as the best option available. However, as AppNexus grew and deployed more and more business‑critical applications and services behind the BIG‑IPs, problems with scalability, flexibility, and reliability grew as well: the hardware was having a hard time keeping up with the growth in traffic.

The problems were of various types, too: performance degradation under load, high CPU utilization, real‑world performance below published specs, limits on processing of SSL connections, port exhaustion, memory leaks and core dumps, hardware issues (with disk drives and power supplies, for example), random rebooting of daemons and the chassis, and frequent patching and upgrades to address critical vulnerabilities.

In an attempt to correct the problems, the team met with F5 in November, 2015 and presented their list of issues. F5 proposed what Ernesto describes as an “insane and impractical idea” depicted in this topology diagram, which basically amounted to throwing more BIG‑IP hardware at the problem. The team’s reaction is captured aptly in the meme. 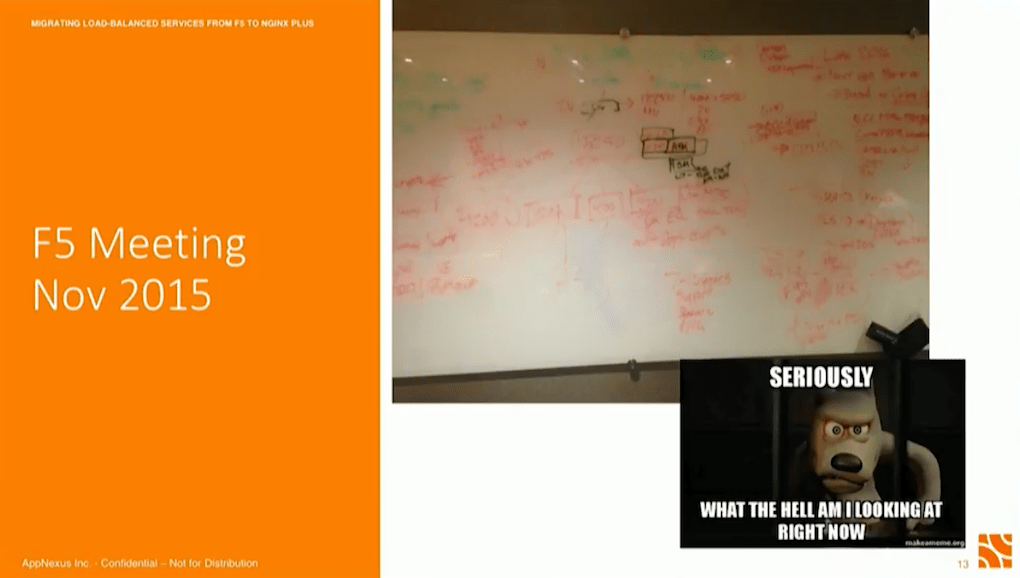 Not only did the proposed solution increase F5’s physical and power footprint in AppNexus’ data centers, it added more points of failure in multiple data centers, didn’t guarantee a gain in performance, and came at a total cost of more than $3 million. To top it all off, F5 couldn’t provide visibility into when the next‑generation hardware in the proposal would be available, beyond saying that it would be at least 18 months.

Unable to wait for improvement, the team started looking for a workable and less expensive solution. They formulated seven requirements: 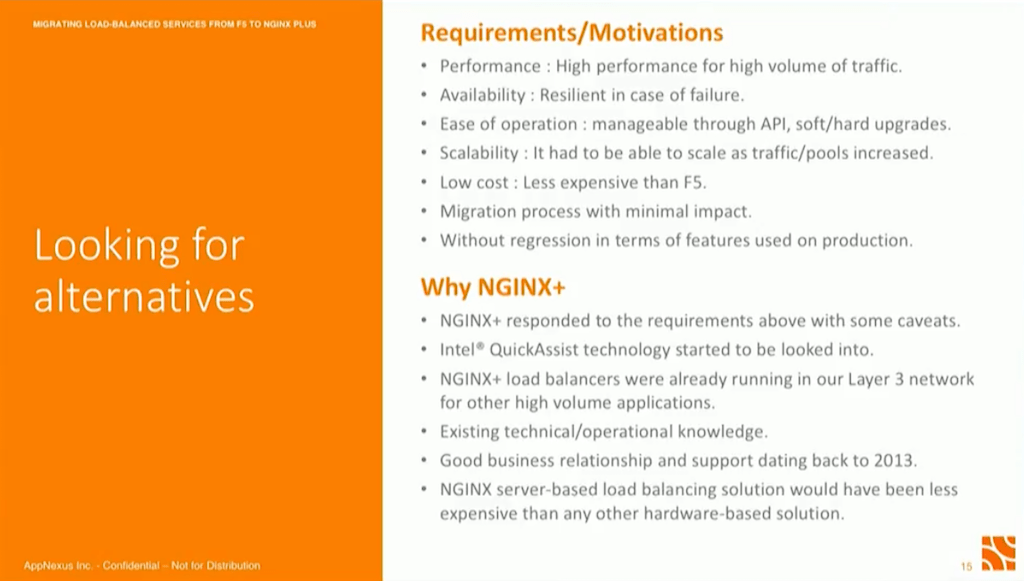 Why Did AppNexus Choose NGINX Plus?

The proposed F5 solution came with a price tag of $3 million. The NGINX Plus solution cost $144,000 as reported by Ernesto – savings of  95%, even without counting how much AppNexus was already paying for the current, problematic F5 solution. Our own research shows NGINX Plus saves you 78% to 87% on a per‑instance basis.

AppNexus had already been enjoying stellar performance from NGINX Plus for the previous two years, in their Layer 3 network for other high‑volume applications. This meant that during the migration from F5 hardware to NGINX Plus, Ernesto’s team would benefit from in‑house expertise as well as NGINX’s award‑winning technical support.

After thorough testing, Ernesto’s team began its transition to software load balancing with NGINX Plus. Watch the complete presentation to hear Ernesto explain the testing process in detail.

Is your hardware load balancer failing to meet your needs? Try NGINX Plus – start your free 30-day trial today or contact us to discuss your use cases.