Kubernetes is an open source system developed by Google for running and managing containerized microservices‑based applications in a cluster. People who use Kubernetes often need to make the services they create in Kubernetes accessible from outside their Kubernetes cluster.

Although Kubernetes provides built‑in solutions for exposing services, described in Exposing Kubernetes Services with Built‑in Solutions below, those solutions limit you to Layer 4 load balancing or round‑robin HTTP load balancing.

This post shows how to use NGINX Plus as an advanced Layer 7 load‑balancing solution for exposing Kubernetes services to the Internet, whether you are running Kubernetes in the cloud or on your own infrastructure.

We’ll assume that you have a basic understanding of Kubernetes (pods, services, replication controllers, and labels) and a running Kubernetes cluster. To learn more about Kubernetes, please visit the official Kubernetes user guide.

Kubernetes offers several options for exposing services. Two of them – NodePort and LoadBalancer – correspond to a specific type of service. A third option, Ingress API, became available as a beta in Kubernetes release 1.1.

Specifying the service type as NodePort makes the service available on the same port on each Kubernetes node. To expose the service to the Internet, you expose one or more nodes on that port. For high availability, you can expose multiple nodes and use DNS‑based load balancing to distribute traffic among them, or you can put the nodes behind a load balancer of your choice.

When incoming traffic hits a node on the port, it gets load balanced among the pods of the service. The load balancing that is done by the Kubernetes network proxy (kube-proxy) running on every node is limited to TCP/UDP load balancing.

Specifying the service type as LoadBalancer allocates a cloud load balancer that distributes incoming traffic among the pods of the service.

The LoadBalancer solution is supported only by certain cloud providers and Google Container Engine and not available if you are running Kubernetes on your own infrastructure. Further, Kubernetes only allows you to configure round‑robin TCP load balancing, even if the cloud load balancer has advanced features such as session persistence or request mapping.

Creating an Ingress resource enables you to expose services to the Internet at custom URLs (for example, service A at the URL /foo and service B at the URL /bar) and multiple virtual host names (for example, foo.example.com for one group of services and bar.example.com for another group). An Ingress controller consumes an Ingress resource and sets up an external load balancer.

An Ingress controller is not a part of a standard Kubernetes deployment: you need to choose the controller that best fits your needs or implement one yourself, and add it to your Kubernetes cluster. Many controller implementations are expected to appear soon, but for now the only available implementation is the controller for Google Compute Engine HTTP Load Balancer, which works only if you are running Kubernetes on Google Compute Engine or Google Container Engine. The Ingress API supports only round‑robin HTTP load balancing, even if the actual load balancer supports advanced features.

As of this writing, both the Ingress API and the controller for the Google Compute Engine HTTP Load Balancer are in beta.

Update in May 2016 – Sample Ingress controllers for both NGINX and NGINX Plus are now available in our GitHub repository.

Although the solutions mentioned above are simple to set up, and work out of the box, they do not provide any advanced features, especially features related to Layer 7 load balancing.

Exposing Kubernetes Services with NGINX Plus

We assume that you already have a running Kubernetes cluster and a host with the kubectl utility available for managing the cluster; for instructions, see the Kubernetes getting started guide for your cluster type. You also need to have built an NGINX Plus Docker image, and instructions are available in this blog post.

Here is an outline of what we’ll do:

Notes: We tested the solution described in this blog with Kubernetes 1.0.6 running on Google Compute Engine and a local Vagrant setup, which is what we are using below.

In commands, values that might be different for your Kubernetes setup appear in italics.

Configuring the NGINX Plus Pod

We are putting NGINX Plus in a Kubernetes pod on a node that we expose to the Internet. Our pod is created by a replication controller, which we are also setting up. Our Kubernetes‑specific NGINX Plus configuration file resides in a folder shared between the NGINX Plus pod and the node, which makes it simpler to maintain.

Choosing the Node That Hosts the NGINX Plus Pod

To designate the node where the NGINX Plus pod runs, we add a label to that node. We get the list of all nodes by running:

We choose the first node and add a label to it by running:

Configuring the Replication Controller for the NGINX Plus Pod

Making the NGINX Plus Docker Image Available on the Node

As we said above, we already built an NGINX Plus Docker image. Now we make it available on the node. For simplicity, we do not use a private Docker repository, and we just manually load the image onto the node.

On the host where we built the Docker image, we run the following command to save the image into a file:

We transfer nginxplus.tar to the node, and run the following command on the node to load the image from the file:

First, let’s create the /etc/nginx/conf.d folder on the node.

Then we create the backend.conf file there and include these directives:

Now we’re ready to create the replication controller by running this command:

To verify the NGINX Plus pod was created, we run:

If you are running on a cloud, do not forget to set up a firewall rule to allow the NGINX Plus node to accept incoming traffic. Please refer to your cloud provider’s documentation.

We can check that our NGINX Plus pod is up and running by looking at the NGINX Plus live activity monitoring dashboard, which is available on port 8080 at the external IP address of the node (so http://10.245.1.3:8080/status.html in our case). If we look at this point, however, we do not see any servers for our service, because we did not create the service yet. 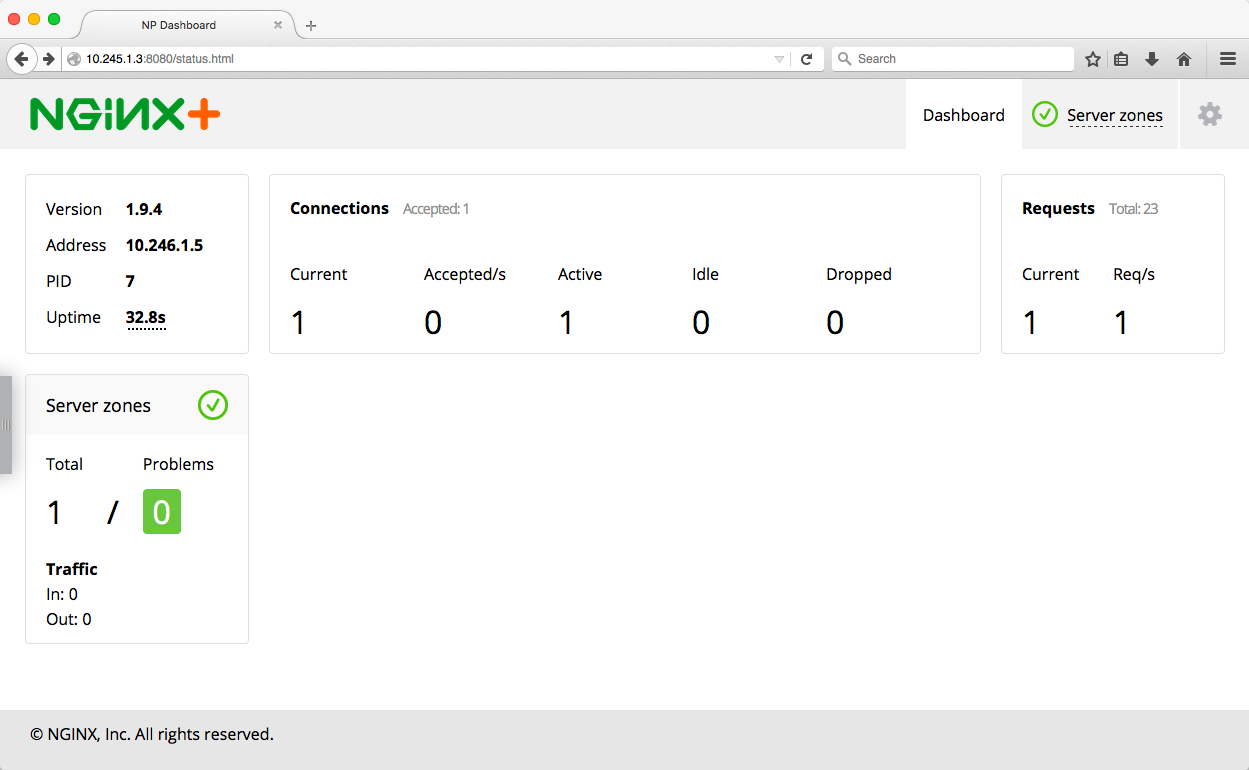 Now it’s time to create a Kubernetes service. Our service consists of two web servers that each serve a web page with information about the container they are running in.

Creating the Replication Controller for the Service

First we create a replication controller so that Kubernetes makes sure the specified number of web server replicas (pods) are always running in the cluster. Here is the declaration file (webapp-rc.yaml):

To create the replication controller we run the following command:

To check that our pods were created we can run the following command. We use the label selector app=webapp to get only the pods created by the replication controller in the previous step:

Next we create a service for the pods created by our replication controller. We declare the service with the following file (webapp-service.yaml):

Here we are declaring a special headless service by setting the ClusterIP field to None. With this type of service, a cluster IP address is not allocated and the service is not available through the kube proxy. A DNS query to the Kubernetes DNS returns multiple A records (the IP addresses of our pods).

We also declare the port that NGINX Plus will use to connect the pods. In addition to specifying the port and target port numbers, we specify the name (http) and the protocol (TCP). We use those values in the NGINX Plus configuration file, in which we tell NGINX Plus to get the port numbers of the pods via DNS using SRV records.

By setting the selector field to app: webapp, we declare which pods belong to the service, namely the pods created by our NGINX replication controller (defined in webapp-rc.yaml).

We run the following command, which creates the service:

Now if we refresh the dashboard page and click the Upstreams tab in the top right corner, we see the two servers we added.

We can also check that NGINX Plus is load balancing traffic among the pods of the service. If it is, when we access http://10.245.1.3/webapp/ in a browser, the page shows us the information about the container the web server is running in, such as the hostname and IP address.

If we refresh this page several times and look at the status dashboard, we see how the requests get distributed across the two upstream servers.

Now let’s add two more pods to our service and make sure that the NGINX Plus configuration is again updated automatically. We run this command to change the number of pods to four by scaling the replication controller:

To check that NGINX Plus was reconfigured, we could again look at the dashboard, but this time we use the NGINX Plus status API instead. We run the following command, with 10.245.1.3 being the external IP address of our NGINX Plus node. To format the JSON output, we pipe the output to jq.

The peers array in the JSON output has exactly four elements, one for each web server.

Now let’s reduce the number of pods from four to one and check the NGINX Plus status again:

Now the peers array in the JSON output contains only one element (the output is the same as for the peer with ID 1 in the previous sample command).

Now that we have NGINX Plus up and running, we can start leveraging its advanced features such as session persistence, SSL/TLS termination, request routing, advanced monitoring, and more.

The on‑the‑fly reconfiguration options available in NGINX Plus let you integrate it with Kubernetes with ease: either programmatically via an API or entirely by means of DNS. Using NGINX Plus for exposing Kubernetes services to the Internet provides many features that the current built‑in Kubernetes load‑balancing solutions lack.

To explore how NGINX Plus works together with Kubernetes, start your free 30-day trial today or contact us for a live demo.