In our recent survey of app developers, NGINX found that more than a third of developers are using containers in development and/or production – and nearly another third are investigating their use. 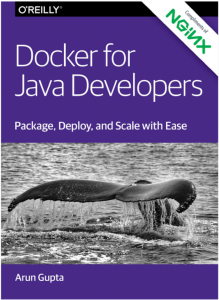 Now a new book, Docker for Java Developers, shows you how to get the most out of Docker containers when working in Java. According to a recent survey by New Relic, Java is “by far the most sought‑after programming skill in job ads – especially for enterprise positions”. Other measures of programming language popularity turn up the same result.

The ebook is written by Arun Gupta, a founding member of the Java EE team – first at Sun Microsystems, then at Oracle. Arun has served on the staff of JavaOne for 15 years, spoken at all major Java conferences, and inspired thousands to get the most out of Java and new technologies as well.

Along with Docker and Java, Arun highlights the use of NGINX and NGINX Plus, which bring strong advantages in “Dockerized” environments. Using these three technologies together delivers tremendous power – both for traditional development, and for taking advantage of the two hottest trends in computing:

The ebook, 80 pages in length, covers all the vital topics:

Every Java developer knows that containers are changing the way Java applications are developed, deployed, and managed. To learn how to get the most out of Docker containers in a Java development environment, download the ebook today.